​If you’re looking for the perfect Christmas gift, we have an idea: Churchill cufflinks. We had these specially made for the Churchill Society and one of our board members, James Maxim, will be happy to get you one pair or more.  The cost is $40.00 per pair. Just click on the “Donate” page, pay $40.00 and write us a note that you would like cufflinks. We will put James Maxim in touch with you.

​The November raffle for the Sir Winston Churchill Statue and Leadership project is underway. This month, thanks to a generous donor, we can offer a brand new six-DVD series from Hillsdale College. The lecturer is Professor Larry Arnn, president of Hillsdale College and professor of politics and history. The six lectures are:
​
All who donate this month (or have previously donated) to the Churchill Leadership Initiative and Statue Project are eligible to win this month’s raffle prize. You can make a tax-deductible donation online or by sending a cheque to the address noted on this page.

To see the bust and video of the maquette of the statue, please refer to the Churchill Leadership Initiative and Statue Project page. The Churchill Society is a registered charity and all who donate will receive a tax receipt. 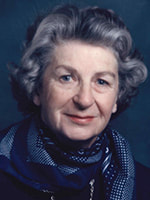 It is with sadness that I note a long-time member of the Sir Winston Churchill Society of Calgary, Mrs. Vera Swanson, O.C., passed away on April 4, 2018.

Vera and her late husband, Frank Swanson (who died in 1990) were founders of the Sir Winston Churchill Society of Calgary and also helped create the Washington D.C. chapter. Vera was an active member of the Churchill Society until her passing, attending our most recent dinner in May 2017, and also offering excellent advice for the Society when I visited her at her home this winter.

Vera was born in Shirley, Warwickshire, England, on April 7, 1916 then lived in the south of England where she met her first husband, taken from her by the Second World War, before they could celebrate their first anniversary. She met and married Frank Swanson at the end of the war. He worked in London as a war correspondent. After the war, Vera and Frank moved to Ottawa, and later, in 1962 with their son David, to Calgary, where Frank was eventually to become the Calgary Herald publisher.

Vera, who I am told was always a determined force of nature, was most active in the arts community and also pressed others into service. Mr. Bill Rhind, a past Treasurer of the Sir Winston Churchill Society of Calgary recalls how, shortly after joining the Calgary Philharmonic Orchestra Board, when he and his wife Pat arrived in Calgary in 1974, he met Vera:

We were introduced to Vera who was a devout CPO supporter. When she learned that Pat came from the same town of Shirley in Warwickshire where Vera spent her younger years she ‘adopted’ us and we have been good friends for the 44 years since then.

In 1979 I became President of the CPO. We were playing out of the Jubilee Auditorium and the acoustics, so I was told by my more knowledgeable co-directors, were really quite bad. The General Manager and I were exploring an alternative venue, the old Palace Theatre. Vera became aware of our activity and told me that she was coincidentally looking to create an Arts Centre to house Theatre Calgary and Alberta Theatre Projects. She suggested, and I was delighted to concur, that we add a Concert Hall to the concept and that she would lead the fund drive.

Her achievements were amazing. She was joined in her efforts by Martha Cohen and Sandra LeBlanc who would be the first to say Vera did most of the “heavy lifting”. She muscled Peter Lougheed, Ralph Klein and every business leader in town to come up with very large sums and, in 1980, the Calgary Centre for the Performing Arts opened its doors. By then she had added two more theatre venues for One Yellow Rabbit and Engineered Air.

As Vera’s Calgary Herald obituary notes, the CPO “remained her love until she passed away” and in 2001, Vera received the Order of Canada in recognition of her tireless volunteer work.

Vera and Frank were indispensable to the Churchill Society. On one occasion, Vera helped anchor the Society on a firm foundation including recruiting new board members when at one point it appeared the Society might fold. As Bill Rhind again recounts:


Years later Vera “persuaded” her great friend, Dr Frank LeBlanc, and me to help her beloved but beleaguered Churchill Society by joining Randy Iversen on the Board. Frank had to put the costs of our guest speaker on his personal credit card until Randy was able to sell enough seats to repay him.

Vera would have turned 102 years young on April 7 and was active to the end. I will close with a former Mr. Bill Rhind’s poignant memories of Vera and also Frank:

Vera absolutely adored her husband, Frank. She was a wonderful hostess who thoroughly enjoyed hosting many events for their extensive network of friends.

She was still attending CPO concerts this year which, at her age, was remarkable. No one would ever accuse Vera of being timid and lacking in convictions. At a recent lunch in her hearing I told the young waitress to speak loudly and slowly since she was in the presence of a centenarian. After the girl left the table Vera told me in no uncertain terms that I had absolutely no right to talk about her age with anyone. I was duly remorseful.

Her son, David, and her myriad admirers, including Randy, Frank, Pat and me, will miss her very much. In a lifetime (if you are lucky) you get to meet and enjoy one Vera.

Vera is survived by her son David and his wife Francine and on behalf of the board and members of the Sir Winston Churchill Society of Calgary, I offer my sincere condolences. 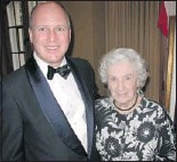